Today, the U.S. Environmental Protection Agency signed a new rule regulating methane emissions, and as part of the analysis for that rule, included a sensitivity analysis of climate benefits using updated estimates of the social cost of greenhouse gas emissions. These efforts, and EPA’s “Report on the Social Cost of Greenhouse Gases: Estimates Incorporating Recent Scientific Advances,” incorporate the Climate Impact Lab’s Data-driven Spatial Climate Impact Model (DSCIM) and are essential to applying an empirically grounded methodology to cost-benefit analysis.

For the Climate Impact Lab, today marks an important application of seven years of research collaboration in pursuit of understanding the economic and societal impact of a changing climate. DSCIM is a robust, empirically-based model for estimating the social cost of greenhouse gas emissions for policymaking, underpinned by frontier research. The theory, framework, and implementation of the Climate Impact Lab’s complete approach has been peer-reviewed and is published in Nature and The Quarterly Journal of Economics, with many technical elements, including the construction of empirical damage functions and valuation of uncertain and unequal local impacts, published in our earlier 2017 Science article.

The social cost of GHG, or SCGHG, monetizes the damages associated with a one metric ton increase in emissions of a given greenhouse gas, allowing policymakers to make apples-to-apples decisions on impacts of climate change by assigning a dollar value to diverse sets of non-comparable impacts. (For more information on the approach we use to estimate the climate change impacts included in DSCIM see this video series.) These dollar values are then used in cost-benefit regulatory frameworks, allowing, for example, the federal government to weigh the cost of implementing carbon pollution standards against the benefits of reduced emissions.

Rapid advancement in both climate science and economics over the last decade created an urgent need to update the SCGHG metrics, as called for in both the 2017 National Academies of Sciences, Engineering, and Medicine (NASEM) report, “Valuing Climate Damages,” and the January 2021 Executive Order 13990, “Protecting Public Health and the Environment and Restoring Science to Tackle the Climate Crisis.” Updating U.S. SCGHG estimates based on the recommendations of NASEM will help ensure that the federal government is using the best available evidence-based science to guide policy that protects Americans against climate risk.

DSCIM is grounded in the best available science and economics to be consistent with the near-term recommendations set out by the NASEM and advance their longer-term research priorities. The model’s features include:

DSCIM also opens a new frontier of climate economics research that can drive a better understanding and management of the impacts of climate change on human welfare, paving the way to a more resilient and sustainable future. It is an evolving model, continuously updated to include new categories of climate change impacts and incorporate the latest advances in science and economics.

For a technical guide to DSCIM as applied in EPA’s report, see our User Manual. 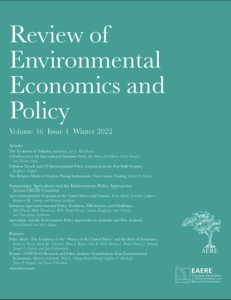