Since the first Earth Day, the planet’s CO2 levels have gone off the rails

When Americans celebrated the first Earth Day on April 22, 1970, the planet's atmosphere was markedly different than it is today. Nearly 50 years ago, scientists measured Earth's levels of carbon dioxide — the planet's most important greenhouse gas — at around 325 parts per million, or ppm. Now, almost five decades later, that number has shot up to around 412 ppm, nearly 90 ppm higher. It's a change atmospheric researchers, geologists, and climate scientists call unparalleled in at least 800,000 years, though it's likely carbon dioxide levels haven't been this high in millions years. In a "business-as-usual" scenario, which means emissions continue unchecked, humanity will see some outrageous carbon numbers, which portends significant future warming. Under this high carbon emissions scenario, global average temperatures are expected to rise this century to between 4.7 and 8.6 degrees Fahrenheit — depending on how sensitive Earth is to these unprecedented levels of CO2, the article notes, citing projections from the Lab's work. 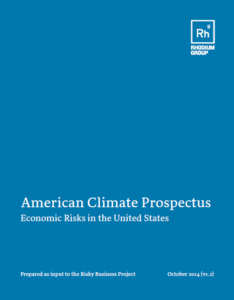 The American Climate Prospectus (ACP) provides a groundbreaking new analysis of climate risks by region of the country and sector of the economy. By linking state-of-the-art climate models with econometric research of human responses to climate variability and cutting edge private sector risk assessment tools, the ACP offers decision-makers a data driven assessment of the specific risks they face.